The article can only be viewed with JavaScript enabled. Please enable JavaScript in your browser and reload the page.

Gyms have boomed tremendously over the past 20 years. Then came the pandemic that has prompted millions of people to cancel their fitness subscriptions. Lockdowns and jobs from home have changed daily routines, and virtual reality fitness apps have thrived.

“Historically, you had your home, your office, and your own gym. Often the degree of separation between those different physical environments was really important to people,” Cole says. “I think with the pandemic, people started to blend in between home and work, and then people started too in integrating home, work, and the gym.” 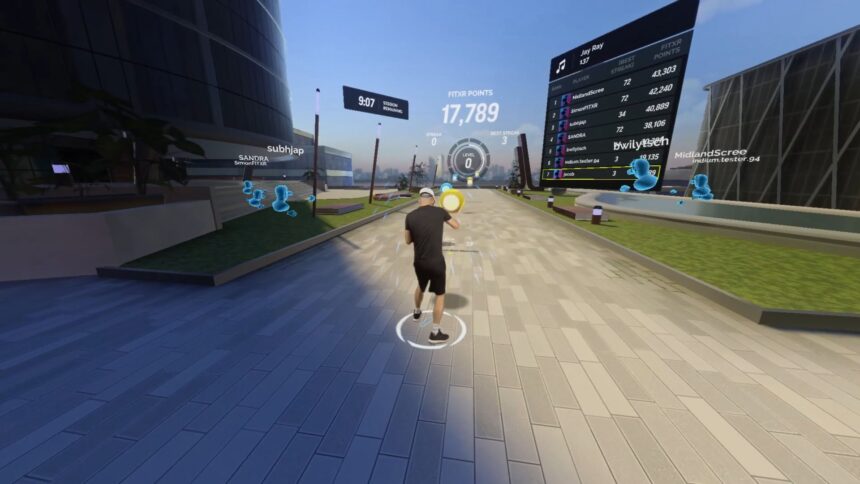 FitXR offers virtual fitness classes where you can do boxing, dance, or HIIT. | Photo: FitXR

Sam Cole is the CEO and founder of FitXR. In 2016, he and his team launched BoxVR, the first VR game designed from the ground up as a fitness app. In a virtual environment, users can complete workouts created by real fitness trainers in virtual reality.

With the pandemic, the fitness app business has started to boom. Facebook, now a Meta company, announced at the time that fitness apps were particularly popular during the pandemic. For BoxVR developers, the growing popularity has led to $6.3 million in new investments.

In 2020, BoxVR received a major upgrade and moved from a VR game to a VR arcade. The development team overhauled the app from the ground up, introducing live fitness exercises with other users, avatars for personal trainers, and additional exercise types like dance and HIIT.

The innovations were not well received at first, and users punished FitXR with negative comments. However, the reason was not technical implementation. BoxVR and its DLC can be purchased for a one-time fee. With the upgrade to FitXR, it also switched to a subscription model and a monthly cost of $9.99. On the other hand, the VR BoxVR game has disappeared from Meta Quest 2.

The initial rejection waned over time, and the FitXR became more successful. With regular updates, new content, events, and ever-improving accessibility, an enthusiastic and dedicated community around FitXR has been formed.

VR courses can be taught by live instructors in the future

Instructors can lead VR sessions live in the future. In the near future, trainers can be personally present in the virtual reality studio. According to Cole, auditions are already underway for live workout classes. “We have the technology to back that up, we just need to know a full market reach strategy about when it’s time to launch something like that.”

However, Cole sees more potential in the registered courses. These will become even more efficient with the improved motion capture of upcoming VR headsets and the use of artificial intelligence. In the future, FitXR should be able to provide fitness feedback based on players’ movements.

“This starts to blur the boundaries between this avatar talking to me and all of this pre-recorded, but it gives me specific prompts based on gameplay. It just feels like direct feedback,” says Cole.

Cole says AI systems are “getting better every day”. In addition, new headphones with additional tracking cameras should provide better tracking of the arm and lower torso. “Soon you’ll get positional data for nearly the entire body from the headphones,” Cole says.

The FitXR experience will be enhanced by augmented reality, mobile apps and wearables

FitXR recently released a companion app for iOS and Android that allows users to track their progress, create exercise plans, or set fitness goals on their smartphone. For the CEO of FitXR, this is an important step into the future.

He says FitXR has gained many new customers through word of mouth. The CEO believes that this is due to the experimental nature of the VR app. With a smartphone, he says, this experience can be extended. FitXR is also working with Apple and Strava on wearable integration.

“I love that vision as you go through a tough run today and then tomorrow you turn on the FitXR. We welcome you to try, congratulate you on going for a run, and tailor your entire class recommendation based on how you went running,” Cole said.

Cole announced in a recent interview that the number of subscribers to the fitness app has quadrupled in the past 12 months. This success is more than remarkable considering that Corona closures and hygiene measures have decreased significantly over the past year and gyms are fully available again.

For Cole, this growth is just the beginning. He believes VR headset sales will increase tenfold in the next three years. The releases of the PlayStation VR 2, Apple’s first VR headset, the Meta Quest Pro (Cambria) and Pico Neo 4 (Pro) from owner TikTok Bytedance could help the market grow again.

If you want to know more about the effectiveness of VR Fitness, you should take a look at my multipart self-test: Earlier this year, You have started the VR Fitness Self-Test And sign up for an annual subscription with FitXR. This is up front: VR Fitness is a viable option for regular workouts at home.

Note: Links to online stores in articles can be called affiliate links. If you buy through this link, MIXED gets a commission from the provider. For you the price does not change.