Sound United recently invited a small group of writers to their headquarters in Carlsbad, California for a peek at the new Bowers & Wilkins 700 speaker series. Most of the reporters arrived the evening before the event for a group dinner. After two years of canceled programs, it was great to see my fellow audiophiles in person. Like any other group, we found out how everyone was doing and some industry rumors. One thing that was surprisingly absent from any conversation was the new Bowers & Wilkins 700 S3 series of speakers that we’ve all come from across the country to see, and most importantly, to hear.

The next morning, we went to Sound United’s headquarters in Carlsbad, California, a small beach town north of San Diego famous for its Legoland California theme park. Sound United is headquartered in a modest corporate park. After gathering in the well-stocked staff café, we gathered in a conference room where Andy Kerr, Director of Marketing and Communications at Bowers & Wilkins, shared details about the new 700 S3 series.

The 700 . series It is Bowers & Wilkins’ most comprehensive line of loudspeakers with six stereo models and two channel amplifiers. Not only does the new 700 Series use Quick Distribution technology, but a new combination is also used on some models that feature an upper tweeter design and a separate mid-range FST. The new 700 series consists of eight models: three floor standing speakers; Three stand-mounted speakers, two in the middle. Of course, the series wouldn’t be complete without new mounts for the three mount speakers.

All series speakers feature a new cabinet design with a slimmer bezel and a subtle curve that gives them a more refined look. While the 700 Series doesn’t have the fancy (and expensive) curved tweeter walls and matrix setups, the new 700 Series’ front fender is thicker than the previous generation to reduce fender interference. The mid-range and bass woofers are installed in “capsules” which protrude about a quarter of an inch from the front fender. On the back of the speakers, you’ll see all the new speaker terminals with four through connectors instead of the center/highs above the bass terminals like on previous designs. The bases are of a completely new design and are required for the largest floor standing speaker, which has a downward firing port. The two final points associated with the cabinetry are more aesthetic: the full-length grilles and a new mocha veneer finish to accompany the glossy white and gloss black options. 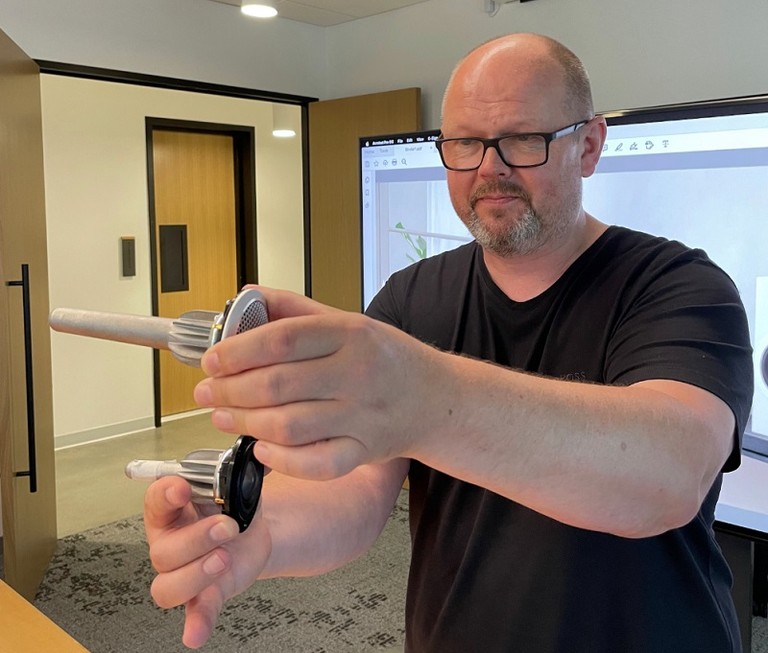 Four of the eight new models feature B&W’s tweeter-on-top design. Andy enthusiastically described the new megaphone pod, holding one like an excited teacher to the front of a class. The capsules are machined from solid blocks of aluminum and are longer than the previous generation, providing a larger load tube to dissipate the back waves from the tweeter. The larger capsules also act as a more effective heat sink. The pods have a radial pattern machined to the end, which is anodized silver for White Gloss cabinets and black for Mocha and Black Gloss cabinets. 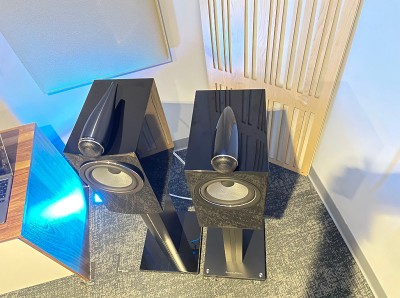 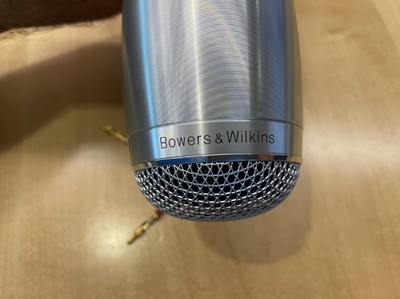 The speaker design on top provides not only a distinctive aesthetic, but also acoustic advantages. Fender-mounted speakers also have elongated tubes, but they are hidden in cabinets. The speakers have improved drivers, a two-point separation and a shock absorber gasket. It should be noted that the diaphragms of the dome itself, while carried over from the previous series. It is made of 30-micron-thick aluminum with a thin layer of carbon applied by physical vapor deposition (“PVD”) to strengthen the dome. The design also includes a specific loop on the back side of the dome, which helps push the breaking point to 47 kHz, above 38 kHz. The speakers are protected by a new protective metal grille, which is more open, and provides increased performance without sacrificing protection. 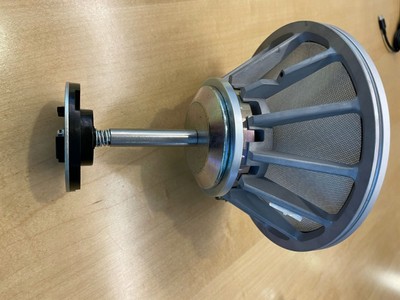 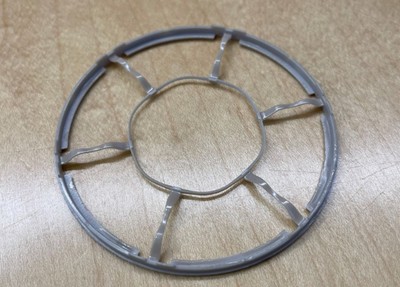 Mid-range drivers on all three-way designs in the lineup have also received some interesting sequential or gradual technical improvements. The driver’s engine and chassis have been updated, but the element that caught my eye was the use of the bio-simulated suspension from the 800 Series tweeter. This is a flexible polymer suspension system that replaces the traditional spider assembly. The system is concentric circles connected by rods of cross section “m”. This is said to improve linearity and reduce distortion. The capsule mounting system places the driver slightly in front of the fender. The mounting system uses a threaded rod with a spring mount. There is a soft mount at the bulkhead to reduce the effect of interference with the driver on the cabinet, or vice versa, vibrations. The tuned block damper is softly attached to the chassis to further reduce vibrations. 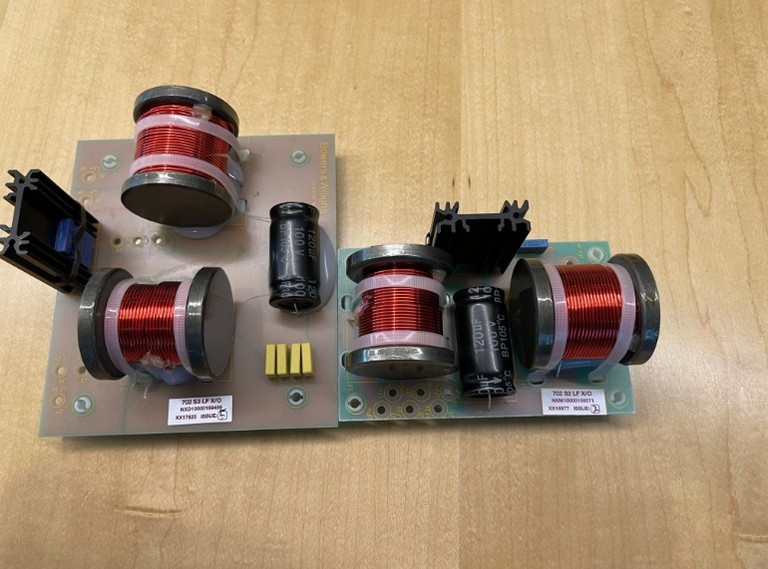 Last but not least, in the driver complement, bus drivers have the same cones as the previous generation but improved engine and suspension kits. While the cones aren’t new, they do use Class 800 Aerofoil technology with varying thicknesses across the driver. Very similar to the cones in the 800 series but with less expensive materials. The new S3 series features improved cross-assemblies, with improved heatsinks compared to the S2 series to take advantage of these improvements. 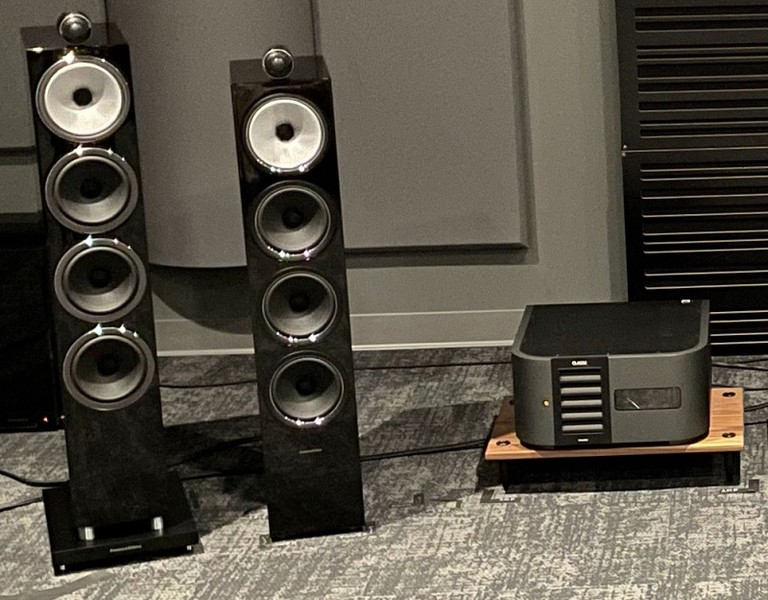 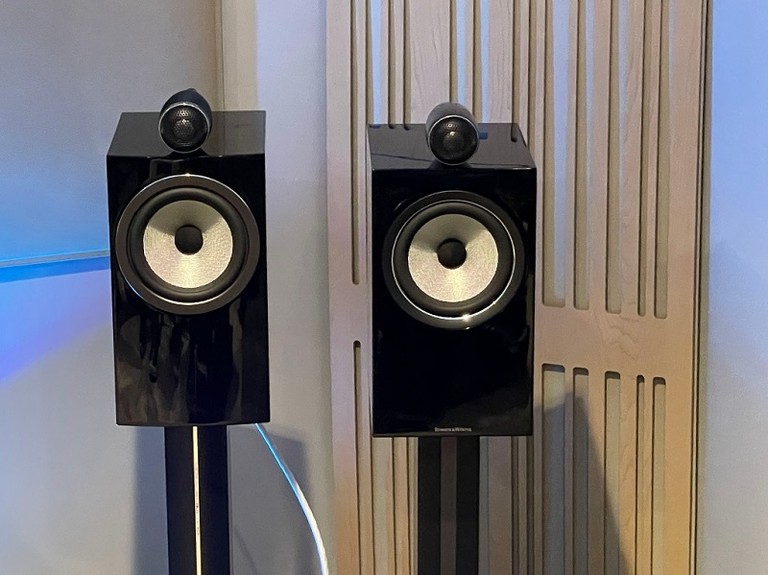 B&W has advised that about 50% of sales of the 700 Series system involve a central channel in the United States. There are also two new models for the center channel; The three-way tweeter on top, the HTM71 S3 ($2,500) and the slightly smaller HTM72 S3 ($1,500) are a two-way design. More specifications for all of the above speakers are available on the B&W website.

After spending the first part of the morning learning about the new 700 series, we can finally listen to them along with their predecessors. Starting with the series’ smallest speaker, the 707 S3, we listened to two tracks on both the 707 S3 and 707 S2. We heard “Only the Strong” by Laura Marling and “Old Love” by Dominique Fils-Aimé streamed from Qobuz, with the Marantz M30 providing the strength. When listening to both tracks, the biggest difference was the mid-bass, which was cleaner on the S3. I can define more definition in strings. The sounds were very similar between the two, and the situation in the audio theater was similar but more solid with the 707 S3. The volume was also a bit bigger and better defined with the newer 707 S3. Moving on to the slightly larger 706 S2 and 706 S3, the differences were very similar. The latest 706 S3s have provided noticeable improvement in clarity and improved imaging.

Having had 805 D3s in my system, I was very curious to hear about the 705 S3s. We listened to Freya Reading’s “Lost Without You,” a song that features female vocals and piano. The 705 S2 headphones are great speakers and reproduce solid picture and powerful piano notes with full bass. The singing was clear, well-formed, perhaps with a touch of whistling now and then. When we switched to the 705 S3s, the image was sharp and better defined with a better sense of space, and a subtle but noticeable difference. I think this may be related to the increased detail in the upper middle and third class where both vocals and piano seemed more specific and three-dimensional. The lower end also benefited from the changes made in this newer version, and the bass notes reach deeper and more defined.

We then moved into a larger listening room with a range of Marantz and Classe electronics and even a reel-to-reel tape player. a Marantz PM-10 Introduce the amplification for the 702 S2 and 702 S3 listening comparison. As with other speakers, the 702 S3 visually separates itself from its predecessor, with its narrow bezels and speakerphones. 702 S3s also added a base, making them significantly longer than their predecessors, perhaps four inches. We listened to several tracks in this room, including “Old Man” by Neil Young from Live at Massey Hall. When comparing the S2 and the S3, the S3s looked like the performance was in a bigger room. The guitar strings in the opening were better defined, and the sounds were cleaner, too. One of the last songs we listened to was Bill Eilish’s “So I Am” played at a significantly higher volume. Both the S2 and S3 could handle volume playback without any noticeable distortion or compression, but the S3s had a deeper, heavier bass. Eilish’s vocals were a little more accurate on the S3s as well, but I did notice a small difference when it came to volume on this track as I did on some of the previous tracks. 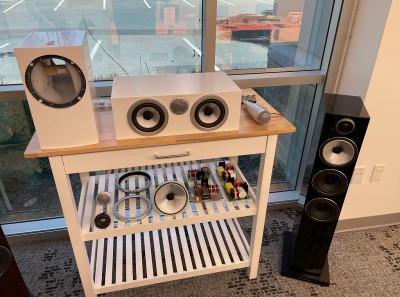 So, what can you eat here? The gradient distribution technology (or cascading in B&W parlance) works. The 700 series takes advantage of new technologies developed for 800 D4 سلسلة Series. The application of these techniques, across the board, resulted in a marked increase in performance. The new speakers improve upon their already formidable predecessors with increased clarity and better imaging. I don’t know if I’ll throw in my S2 series speakers for the S3s, but if I’m on the fence about buying the 700 series speakers, I think this will convince me to go with the new S3 speakers.

What do you think of the Bowers and Wilkins 700 series speakers? Share your thoughts in the relevant forum thread below.

* For your convenience, we have included a link to Voice advice to buy this product. As an audio advice assistant, Audioholics.com benefits from eligible purchases.

Unless otherwise noted, this is a preview article for the featured product. An official review may or may not follow in the future.

Although I was not previously a fan of what I heard in the lower classes, I appreciate what goes into their designs.
I hope you guys will check out some of their new gear!

Sound United recently invited us to their Carlsbad, California headquarters for a sneak peek at their new Bowers & Wilkins 700 S3 speakers. The new 700 S3 series consists of eight models: three speakers on the floor; Three stand-mounted speakers, two in the middle. With a new cabinet design, mid-range and bass driver mounts, bases, crossovers, firing ports, and many other changes over their previous models, have Bowers and Wilkins changed too much for loyal customers or got them right?

We had the opportunity to listen to the 700 Series 2 vs the new Series 3 to better understand the performance differences.