Team Ireland Sevens came from behind twice against Australia to win the bronze medal at the Sevens World Cup.

After a disappointing 17-10 defeat to New Zealand earlier on Sunday, coach James Topping’s side responded superbly to beat Australia 19-14 in the bronze medal final at Cape Town Stadium.

The closely contested first half provided few chances before Australia opened the scoring shortly before the break, a clever substitution that allowed Nathan Lawson to break through and break free from deep, with Stuart Dunbar turning to Australia 7-0.

However, Ireland still had plenty of time to respond and Shawn Crippen put them on the scoreboard in the last game of the opening period, diving under defenders before captain Billy Dardis turned around to leave the two teams tied at the break.

Then Corey Tolle cemented Australia’s lead early in the second half, defeating a string of Irish defenders with a knitting tour, and scoring once against Dunbar.

But Ireland made their way back into the competition once again thanks to a superb result by electrician Terry Kennedy, who kicked behind Australia’s defense before winning by foot and falling back. Mark Roach added the transformation and the results were linked back.

Kennedy was then instrumental in what proved to be the decisive result, making a loose pass to keep the team’s brilliant movement alive, with Harry McNulty adding the finishing touch into the corner.

The try was granted after a quick TMO check, although this time Roche was off target by trying to divert from the sideline.

A costly knockout from Jamie Turner then killed Australia’s last chance to strike back, and Ireland grabbed the resulting ball before Kennedy sent the ball into the stands to end the competition.

“It’s incredible. This is our group, we never fail to surprise,” Kennedy said. 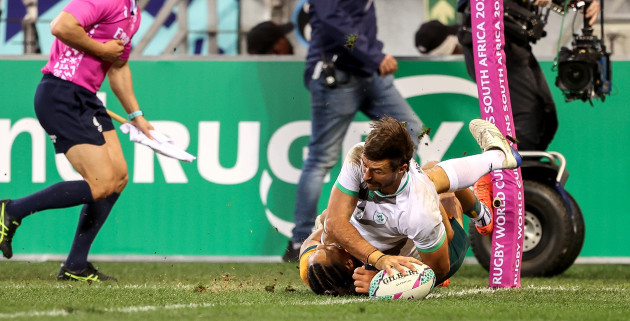 Every time our backs are on the wall we stand up. Losing the semi-final against New Zealand, and doing that (against Australia), it’s unbelievable.”

Third place represents Ireland’s best achievement in the Sevens World Cup, and concludes a very encouraging year for the team on the World Championship circuit.

Earlier on Sunday, the Irish women wrapped up their World Cup campaign He beat England to secure seventh place.